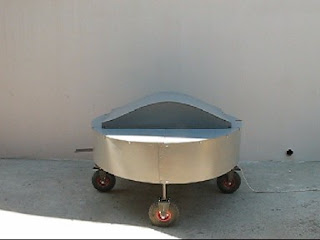 10.9.1. Results of the tests of a quantum engine for generating thrust without the ejection of reactive mass

Up to now, the reactive method was the only method of producing thrust in vacuum. It is based on the ejection from the nozzle of reactive mass during the combustion of fuel in the jet engine. It is considered that the gas pressure during the combustion of fuel acts on the internal walls of the jet engine and produces thrust. The thrust momentum is proportional to the speed and mass of the fuel ejected from the nozzle.

Numerous attempts have been made to produce thrust without the ejection of reactive mass. These were purely empirical attempts within the framework of the existing knowledge. Without having clear theoretical substantiation, it was impossible to create such an engine. The point is that in accordance with the third ’s law, when effective force is equal to the counteracting force, thrust is created with repulsion from another mass or body. The wheels of an automobile are repulsed from the road surface. In the jet engine, the thrust is created as a result the ejection of reactive mass, as if being repulsed from this mass. Air and hydraulic screws, screwing into the air and hydraulic medium, reject the mass of this medium, being repulsed from it.

But is it possible to be repulsed from vacuum? The theory of Superunification asserts this is possible by considering space vacuum as the elastic quantised medium (quantised space-time) from which it is possible to be repulsed. This is the unique weightless medium which has not analogs in nature and whose structure is described for the first time in the theory of Superunification. It is shown that the weightless quantised space-time penetrates through all ponderable bodies. In this case, all ponderable bodies are the composite and indissoluble part of the weightless quantised space-time. The mass of a body is formed as a result of the spherical deformation (bending according to Einstein) of the weightless quantised space-time by elementary particles which form part of the body. In this case the mass of the body is the component part of the elastic quantised medium, its energy cluster. Mass, as a gravitational charge, is a secondary formation in the quantised space-time.
All known methods of producing thrust are based on the external action with the repulsion from the known media. In this case all known apparatuses for the thrust generation must be treated as closed quantum-mechanical systems. In accordance with the theory of Superunification, the quantum engine is an open quantum-mechanical system when thrust is created inside the body of the operating unit (activator) of the quantum engine. To create thrust without the ejection of reactive mass it is necessary to switch over to the open quantum-mechanical systems, treating quantised space-time as an elastic quantised medium. Consequently, it is possible “to push away” from such an elastic quantised medium thus generating thrust. In this case, there are no contradictions with third ’s law, whose fundamentality is thoroughly checked, and is completely confirmed by the theory of Superunification. The reader should refer to the section 3.5.3. Simple quantum-mechanical effects, and also to patent [9].

It is natural that the control of gravity on the global scale is not possible at the moment. The perturbing mass of the Earth is required to obtain the strength of the gravitational field of 1g (acceleration in the terrestrial gravitational field) in pure vacuum. This deformation of the outer space free from the external source is is associated with colossal power consumption.

But here the deformation of the quantised space-time in the local region inside the operating unit (activator) of the quantum engine already corresponds to energy which is spent by the body on its acceleration. In this case the classical law of energy conservation. Deformation of vacuum takes place in the body of the operating unit of the quantum engine which actively interacts with the vacuum medium which penetrates the body. The internal thrust force appears inside the body of the operating unit. This is not external repulsion as in the jet engine, it is internal repulsion. Therefore, without having new knowledge, it was not possible in the pas to analytically predict such processes and effects.

But the theory of Superunification goes further and differs from the classical theory by the fact that it is the very strongly developed quantum theory which operates with the already superstrong electromagnetic interaction (SEI) as the basic, previously unknown energy source in the universe. For comparison, the classical theory forbids motion without the ejection of reactive mass, whilst the theory of Superunification permits this motion. It is gratifying that during motion with acceleration regimes form inside the quantised space-time in which deceleration is observed during energy regeneration. With recuperation the spent energy returns and can be used for the second time. Such regimes are used in the hybrid circuits of automobiles with electric transmission. The kinetic energy of a moving automobile with its braking is restored and returns to the energy accumulator – the storage battery. With the acceleration of the automobile the stored energy is used for the second time. In this case, the fuel consumption in the regimes of frequent acceleration and braking is sharply reduced. Inertia possesses a remarkable property - capability for regeneration.

Inertia regimes with regeneration are used actively in the quantum engine. The capability of the quantum engines for energy regeneration during thrust ensures the most economical power cycles of the quantum engine. It is necessary to compensate the energy losses due to friction in the mechanisms of the engine and ohmic losses in the electrical wires and the windings of the activators. In comparison with the traditional internal combustion engine (ICE) and the jet engine, the efficiency of the quantum engine for the generation of thrust can exceed that of the traditional engines 20 or more times. Let us compare the regimes of motion of an expedition to Mars along the ballistic trajectory as far as the inertia and the trajectories of motion in the regime of acceleration - braking with regeneration are concerned. In both cases, the path integral which determines power consumption for motion, excluding losses, is equal to zero. However, in the case of motion the acceleration-braking regime, using a quantum engine, we repeatedly gain in the duration of the expedition, completely compensating weightlessness [9]. In this case, the quantum engine works in the regime of constant conversion and energy exchange of superstrong electromagnetic interaction (SEI).

It would seem that the patent [9] describes in a simple manner the construction of the operating units (activators) of the quantum engine and the principle of its operation. But this is done only theoretically. The patent does not stipulated the modes of powering the operating units and the materials from which they are made. Even the author of this development had to face serious problems in creating the quantum engine and determining the thrust regime during operation of the engine. Two years of intense work were required for this. It was encouraging that immediately it was possible to generate a small thrust of 0.1 N, and this thrust was then further increased.

In two years (2007-2009) of experimental work it was possible to increase the thrust from 0.1 N to 500 N with the mass of apparatus being together with the chassis. The diameter of the apparatus of was , the height together with the chassis (photo). It can be concluded that the earth’s gravity was overcome with the aid of the quantum engine. Outwardly the apparatus resembles a small flying saucer (or saucepan), but this does not mean that the apparatus must have the form of a ‘plate’. It can be any form. Unusual even for the author was to observe the motion of the apparatus which has no screws, jet nozzle and drive for the wheels. High stability is typical of the work of the quantum engine. The effect of generating thrust without the ejection of reactive mass during the operation of the quantum engine did not disappear even after 6 months in repeated tests. This fundamental effect is always well reproduced. An apparatus with the thrust of 5000 N weighing is being prepared for tests. If everything goes without problems, then its flights will be demonstrated at the Moscow Aerospace Salon (MAKS) at Zhukovskiy in the region. The results of tests and design features of the quantum engine, the procedure for calculation of operating units for the given thrust and the operating modes, will be examined in the second volume of Quantum Energetics.

In principle, there are no special limitations on the thrust of quantum engines. A procedure has been developed for calculation of the design parameters of the quantum engine for any thrusts, including 100 tons (1000 N), 1000 tons (10000 N) and more. High efficiency is the distinctive special feature of the quantum engines since the quantum engines do not use the uneconomical thermodynamic cycles. They use exchange cycles inside the energy-consuming quantised space-time. The construction of interplanetary spacecraft of the new generation with the complete compensation for weightlessness becomes reality. The organization of an international expedition to Mars with the participation of the European Union, and and other countries will become possible.

It should be noted that the quantum engine is a relatively complex construction with the complex electronic control system. It is an expensive apparatus and its repeated construction can be ensured only by powerful organizations with the participation of specialists in the region of the theory of Superunification. However, no specialists are being trained in this area at the moment. It is hoped that when this book is published, its content will be accepted the university courses of physics and power engineering, giving new knowledge to future specialists.

On the other hand, the efficiency of the quantum engine is the thorough experimental verification of the theory of Superunification which predicted similar effects and they have been confirmed experimentally. Most importantly, the efficiency of the quantum engine proves that the vacuum has a structure in the form of quantised space-time with which it is possible actively to interact. Prior to starting the series production of quantum engines, it would be desirable for independent laboratories to study of the processes of the interaction of the simplest operating units with the quantised space-time, investigating its elastic properties. This is new knowledge which will have to be acquired. A simple and inexpensive instrument, which can be repeated in any university laboratory, has be constructed and is proposed for repetition below, or it can be ordered from us.

Video: The tests 2009 of a quantum pulsed engine for generating thrust without the ejection of reactive mass

Leonov
Professor Vladimir Leonov is a Russian theoretical physicist, experimentator and inventor. In 1996 he discovered the quantum of space-time (quanton) and superstrong electromagnetic interaction (fifth force). He is the author of the theory of Superunification, holds a number of important patents in the region of new energy and space technologies and is the founder of quantum power engineering. He published more than 200 scientific articles and 6 monographs: `1. Leonov V. S. Quantum Energetics. Volume 1. Theory of Superunification. Cambridge International Science Publishing, 2010, 745 pages. At present, V. Leonov heads his own laboratory working on the development of a new direction in power engineering-quantum energetics. An experimental model of a quantum engine which underwent successful tests was developed for the first time. New results were also obtained in the area of cold synthesis in studies of quantum heat generators, etc. Dr. V. Leonov was awarded a Russian government prize in the area of science and technology and in 2007 was included in 100 leaders of science and technology of CIS countries.